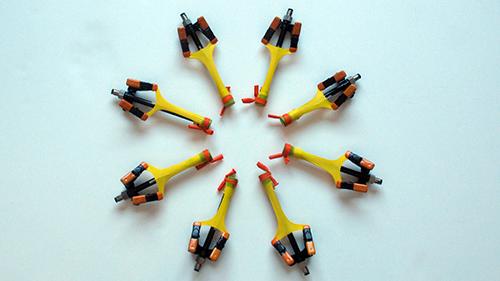 Can a balloon membrane produce a pure sound wave like an oscillator? Jean-François Laporte found out that it can.

His Acoustic Oscillators are very small instruments. Each Acoustic Oscillator consists of a short piece of small-diameter metal pipe (through which compressed air comes in) covered with a latex membrane held tightly by fixed clamps. A second membrane is tied around the tip. By playing with the tension of membrane 1 and the position of membrane 2, one can tune the Acoustic Oscillator to a specific frequency, as with an electronic oscillator. Obviously, due to the small size of the instrument and the absence of a sounding board, the accessible frequency range is in the high-treble. But the sound remains warmer and less piercing than that of an electronic oscillator, possibly because it travels 360 degrees instead of being directed by the cone of a speaker. It can be reminiscent of tinnitus, though a lot less annoying than that.

The Acoustic Oscillators are very close relatives of the Insects, another instrument invented by Jean-François Laporte. In fact, they are Insects prepared in such a way as to make them “stable,” to make them emit a high-pitched, pure and continuous sound.

The Acoustic Oscillators are the most delicate instruments that Jean-François Laporte has created to date, a most subtle invention that does not go unnoticed.