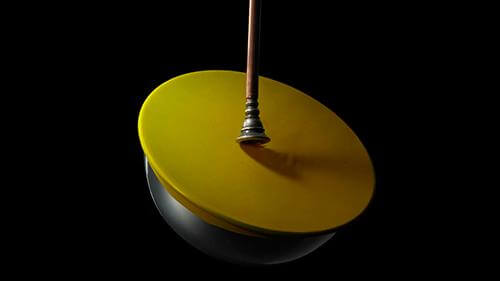 The Bowl is one of the first instruments invented by Jean-François Laporte who, this time, sought to create an instrument with a much longer reverberation.

A kind of drum for the poor, the Bowl consists of a salad bowl covered with a latex membrane (a split balloon, stretched like a skin). You can play it by tapping or rubbing the membrane with your fingers, but the technique recommended by its creator, the one that gives the most magical results, consists of inhaling or blowing in a tube attached to the mouthpiece of a wind instrument (tuba, trombone, trumpet) that rests on the “skin.”

The instrument is thus transformed into a cavernous body displaying a rich palette of sounds with astonishing reverberations. Blowing creates beats and whistles between the skin and the mouthpiece. Inhaling produces cavernous sounds that resonate for a long time. By changing the position of the mouthpiece (in the centre of the skin, near the edge), its angle (flat, slightly inclined), and the pressure exerted on the latex, one can manage to make the Bowl sing like a choir. Pitches clash through the reverberation, harmonics abound. The whole thing can be reminiscent of controlled feedback… or the song of the planets.

In sound installations (“Khôra”) or on the Babel Table, the mouthpiece of the Bowl is connected to an air compressor. The addition of an LED light inside the bowl makes it possible to highlight how sound waves travel across the latex skin.

Simple design, innovative playing techniques, unusual sound worlds: the Bowl lends itself to multiple uses and still has many surprises in store!

Presentation of the Bol