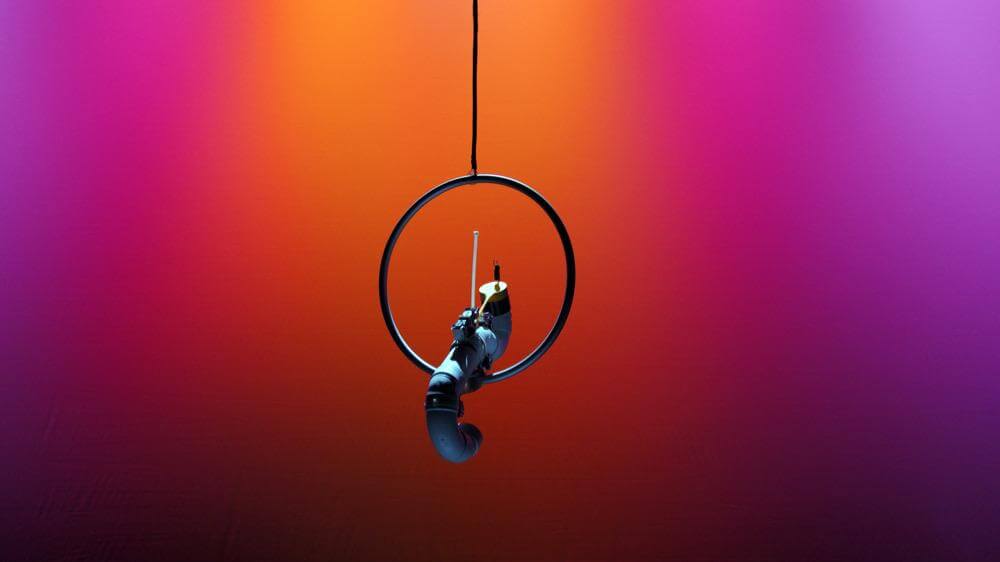 Hey, we’re not talking plumbing, here! Despite its S-shape reminiscent of what you find under the kitchen sink, The Pipe is a bona fide acoustic instrument!

The Pipe is the slightly twisted cousin of the Tu-Yo, an instrument made of a long PVC tube and a latex membrane. The Pipe consists of PVC lengths and elbows. At one end, a split latex balloon covers the opening, acting as both a double reed and a skin. The performer blows into the balloon mouthpiece or taps the membrane in percussive mode. You can pull on the mouthpiece to “lengthen” and “shorten” the pipe, or even compress the neck of the mouthpiece with a finger to make the air “scream” and set the latex beating.

However, The Pipe is more often used connected to a source of compressed air. Moreover, it is equipped with four motors controlled remotely by the performer or a computer. The first motor moves a rod that modifies the behaviour of the mouthpiece as described previously. The next two place a plastic or wooden stick against the membrane: this device will bounce according to the vibrations of the instrument to create multiple percussive effects. The fourth motor activates a disc which can completely or partially block the bottom end of the pipe—its “bell”—much like the mute of a trumpet or trombone. Finally, the instrument is equipped with an electronic valve that allows the computer system to produce various types of air flow (attack, sustain, crescendo/decrescendo, etc.).

These mechanical elements greatly enrich the sonic palette of the instrument, which ranges from a simple harmonic breath to a thunderous drone, screeching wails, and the maniacal clicking of the stick.

Communication between the motors and a computer or a remote control allows for the performance of detailed scores. This is the case in Stefano Bassenese’s “Le Perroquet,” for The Pipe and electronics. And in “Electric Air-Jam,” Zack Settel controls several Pipes while dancing, a motion sensor sending commands to the motors.

In installations or when used as a solo instrument (as in the aforementioned works), The Pipe is attached to a hoop that hangs from the ceiling, giving the impression that it is perched casually like a large bird (the inspiration behind the title of Bassenese’s piece). This type of presentation, suspended in the void, lays bare the instrument, leaving the audience to try to understand how this strange beast can possibly make those sounds.

Being rather compact, thanks to its curves (compared to the Tu-Yo, whose automation is similar), The Pipe fits perfectly into the Babel Table, where it proudly sits like an elephant’s trunk. Used on its own, in a group or integrated into this multi-instrument, The Pipe strikes the imagination and shakes the eardrums.

Presentation of the Pipe

This video demonstration of the instrument The Pipe was filmed and Mixed by Jérôme Fino (Fr) in Marseille – France. 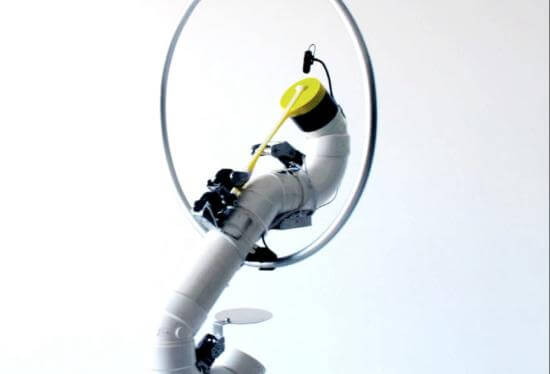 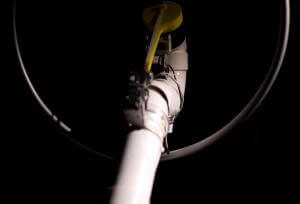 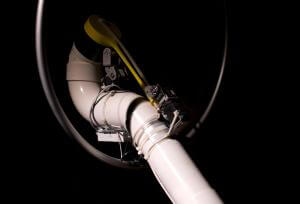 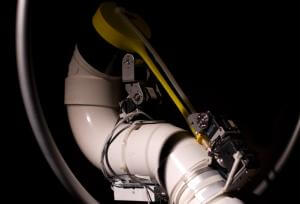