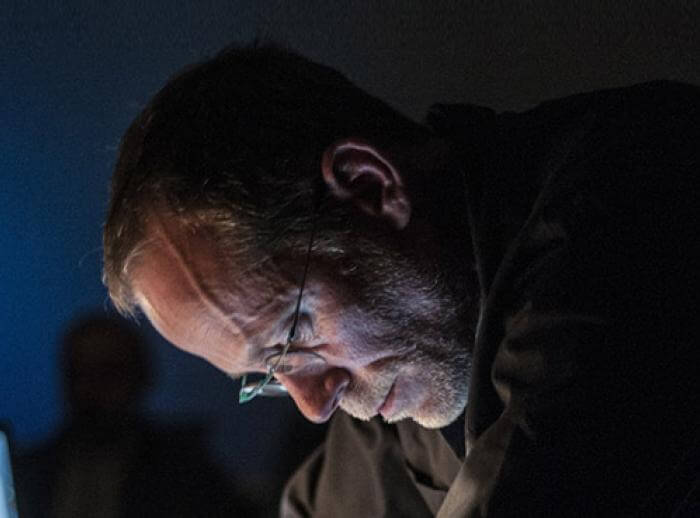 Benjamin Thigpen is a nomad musician and composer.

Benjamin Thigpen, nomad, American by birth, French by naturalization, currently migrates among France, Belgium, Sweden, Italy and Canada. After dropping out of conservatory, he earned degrees in English Literature (Oberlin College), in Comparative Literature (UCLA) and in “Esthetics, Technologies and Artistic Creations” (University of Paris 8). He taught computer music for six years at Ircam (Paris) and for seven years at the Conservatory of Cuneo (Italy). He now teaches computer music, acoustics and psychoacoustics at Arts2 (Belgium), while also working as a free-lance programmer and musician.

He creates music for loudspeakers: purely electroacoustic; live computer performance; interactive music for acoustic instruments and computer. He often works in multi-channel formats, using space as a primary compositional parameter. He composes at GRM (Paris), at EMS (Stockholm), at VICC (Sweden), at STEIM (Amsterdam), at l’Espace Totem (Montreal), in his apartment and in the train. He performs in duo with the instrument inventor and composer Jean-François Laporte (Rust), with the cellist Benjamin Carat (Fluid Identities) and with the percussionist Seijiro Murayama.

His music is concerned with issues of energy, density, complexity, impermanence, non-identity and violence. He believes that music is a lived visceral experience rather than a language, and he considers that music is not the art of sound but the art of the transcendence of sound.