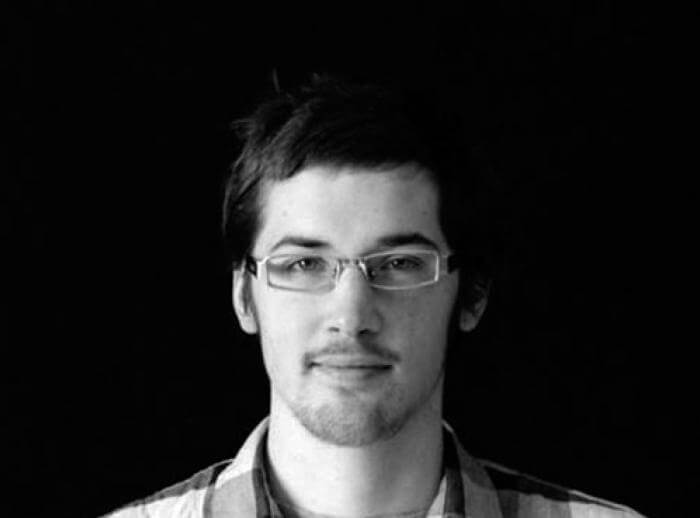 He has developed, since 2005, a direct approach to musical expression through his electroacoustic and instrumental work. He studied composition in cegep St-Laurent and at the Conservatoire de Musique de Montréal. Now, he specializes in the composition of mixed music. His actual research concerns principally the composition / choreography of the musical performance. It’s through his close collaboration with Tedd Robinson that he has discovered a passion for movement. He performs many of his works himself. His recent piece Corde à Vide was composed for a suspended musician at the center of a chime of plucked-string instruments. He was chosen twice to perfect his compositional skills at the Orford Arts Centre and once at the Académie du Domaine Forget. Charles received a Dora Award nomination for his music for Tedd Robinson’s Sticks, commissioned by Yvonne Ng. He has also received grants from the CAC, CALQ, FQRSC and the Socan Foundation.

Moreover, his work Frette appears on the Cache 2009 compilation and was presented in France the same year. In 2010, he won the first prize of the Jeux de Temps/Time’s Play (JTTP) Competition, organized by the Canadian Electroacoustic Community (CEC), as well as the third prize (Hugh-Le Caine) of the SOCAN Foundation with his piece Au Boute. Thanks to these prizes, this same work was radio broadcasted numerous times and presented in Mexico in May 2011.

Most recently he has collaborated and performed in the work ACT in a Room with Sticks with Tedd Robinson and Ame Henderson, performed at the Canada dance Festival 2013. He was commissioned by Magnitude 6, a brass quintet, for a new work, Full_Foule, which was performed in the festival Montreal en Lumiere.

Charles Quevillon is Co-director at Centre Q: a centre for questioning in Quyon, Quebec and resident composer for 10 Gates Dancing.