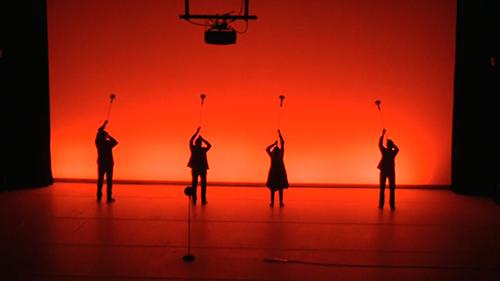 Woodwinds, one of the orchestra’s instrument families, all share three characteristics: a mouthpiece, a body (which can be straight, like a clarinet, or curved, like a saxophone), and a bell.

The Trompe-sax respects this “technical sheet” to the letter, but this instrument invented by Jean-François Laporte is unique: a baritone saxophone mouthpiece is attached to a long plastic tube, itself attached to the bell of a heavy truck horn. The device has no holes or keys: performers can count only on their mouth and lips to modulate the pitch and timbre of the sound produced.

Until now, Jean-François Laporte has used this elephantine horn strictly in compositions for several musicians. Group play makes it possible to produce effects of sound clusters and flapping close frequencies. The Trompe-sax is featured in Laporte’s “La Plénitude du vide” for six Trompes-saxes and other invented instruments, which received the 2006 OPUS Award for Best New Work. But the most striking illustration of the potential of the Trompe-sax is “Incantation,” another composition by Laporte, for four Trompes-saxes, composed for the Quasar Saxophone Quartet. “Incantation” is one of the most often performed works from Quasar’s repertoire.

The Trompe-sax is highly regarded for its ability to project sound in various directions, allowing musicians to play with multiple sound reflections. In addition, the instrument is not afraid of the elements, which makes it a perfect option for outdoor concerts—and Quasar jump at every opportunity to demonstrate that fact. Looking like a medieval horn fallen into the hands of a music-loving trucker, the Trompe-sax sounds the triumph of imagination.